Beautiful Santorini, forged by the fury of the volcanic earth and moulded by the warm Aegean, is as close to paradise as you'll find in the Greek islands. With its multicoloured cliffs and beaches, whitewashed hillside terraces, ancient sites and rolling vineyards, the island offers excitement, intrigue and sun-soaked relaxation.

If you're heading to the Cyclades, these are the must-see attractions on Santorini.

Fira presents a delightful, if haphazard, network of narrow, winding alleys, adorned with cube-shaped houses, terraces and blue-domed churches. Santorini's dramatic capital clings to the clifftops high up above the caldera - the sea-filled volcanic crater, formed 3,600 years ago through an island-shattering eruption - offering incredible views along with great hiking terrain. Make your way up the cable car from the port at Skala, or take the lengthy staircase, for boutique shopping, souvenir-hunting and dining out. 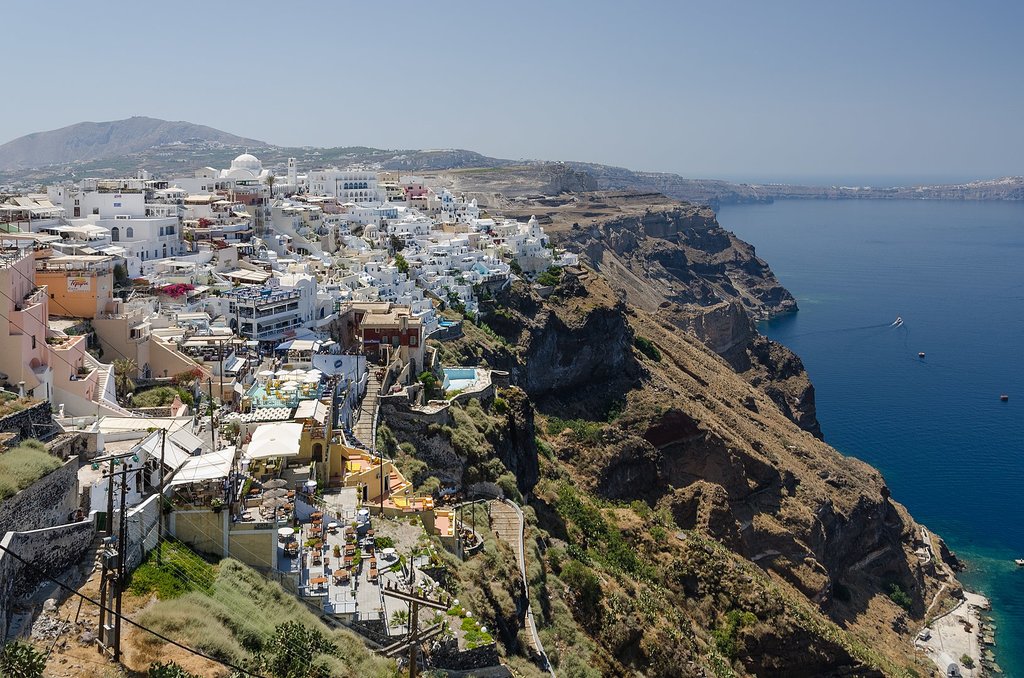 In the centre of Santorini's submerged crater lies the twin islets of New Kameni and Old Kameni, two products of ongoing geothermal activity within the caldera. Jump off your boat to enjoy a therapeutic dip in the hot sulphur springs, and if you choose, lather your body with warm mud. A day trip out to the satellite islands also includes a visit to nearby Thirassia, a peaceful outpost that once formed Santorini's north-western coastline before the eruption.

Discovered in the late 1960s, Akrotíri is a supremely preserved archaeological site which offers a close-up glimpse of what life was like for the ancient Minoans. The 'Greek Pompeii' found itself buried below lava for three-and-a-half millenia, but its fascinating pathways, homes and artefacts are now visible to the public as a museum. The village remains covered to protect the excavations from the elements, although this time by a roof rather than thick layers of rock and ash.

Poised on the northern tip of the caldera, 7.5 miles (12km) up the coast from the capital Fira, idyllic Oia offers arguably the best views on Santorini. From this upmarket clifftop town, with its tangled labyrinth of streets, you can gaze out across the crater towards the Kameni islands and beyond. Photographers flock to the Venetian castle of Agios Nikolaos in the late afternoon and early evening, eager to take the perfect pictures of the shimmering sea and rolling landscape. 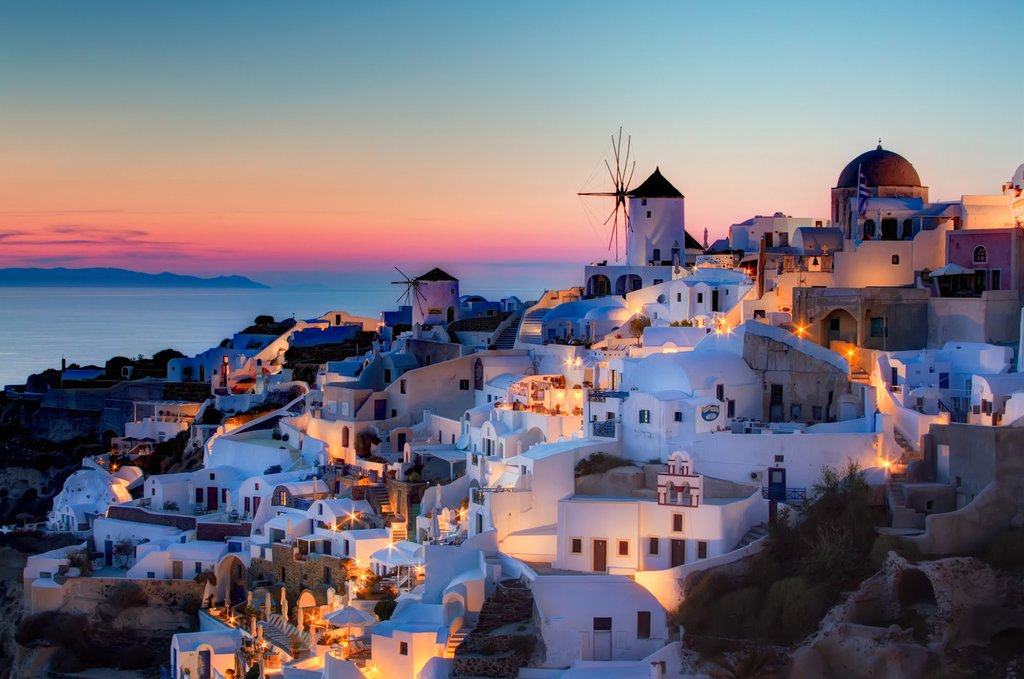 The aptly named Red Beach, just outside of Akrotiri, is a genuinely intriguing stretch of coastline and one of the major natural attractions on Santorini. Formed by volcanic rock from the nearby caldera, the unique, rust-coloured shore is framed by towering, red-hued cliffs, which prove an inevitable draw for curious visitors. This really isn't the place to come for a quiet sunbathe, or to feel fine golden sands between your toes, but it's a rugged geological feature not to be missed. If you don't fancy taking the rocky path down the cliffs, the beach is easily accessible by boat.

From its elevated outlook on Mount Profítis Ilías - Santorini's highest point - Prophet Elias Monastery provides room for quiet contemplation amid inspiring natural scenery. This is one of the oldest and most attractive of Santorini's many churches, notable for its fortress-like exterior and bell tower. Standing in the chapel gardens you can see right across the island, taking in views of the vineyards, valleys and the undulating clifftops. Take a deep breath and simply admire the beauty.

The jet-black beach at Perissa, which stretches 3.5 miles (6km) along Santorini's south-eastern coast, is the most famous on the island. This lively tourist hub, flanked by tamarisk trees at the foot of Messavouno mountain, provides sandy access to the warm, clear Aegean and offers leisure time both at sea and on-land. You can enjoy a wide range of watersports here, go on a diving expedition, or simply relax in a coastal bar or café.

The traditional hillside settlement of Pyrgos, the most elevated on the island, shows Santorini in a different light to the bustling resorts. This sleepy village, centred around the ruins of the medieval Kasteli Castle, offers an authentic snapshot into Cycladic life before the tourists arrived. Declared a protected settlement in 1995, this living, breathing museum features charming pale-white cottages, churches and galleries.

You can't help but be impressed by the ancient ruins of Thira, perched on a ridge high up on Messavouno mountain. Stroll around the site to view the remains of homes, temples, a theatre and gym dating from the early Roman and early-Byzantine era. Access to the archaeological site is via a winding road up from the mountain from Kamari - you can get your heart rate up en route to one of the most striking historical attractions on Santorini. 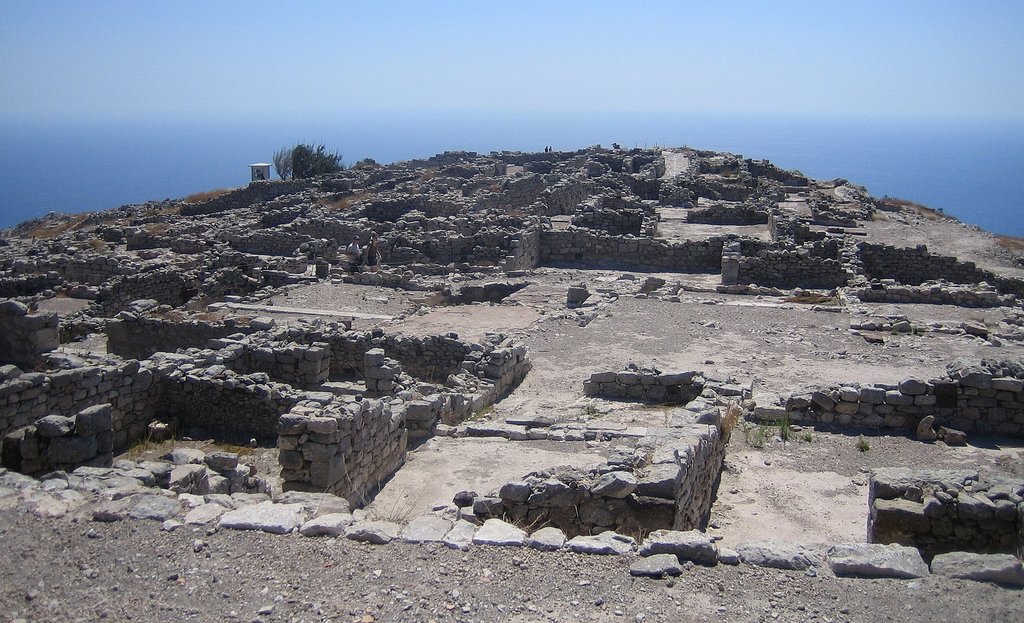 8 Great Place to Visit In and Around Bournemouth
Author: Expedia Team

With the Jurassic Coast in one direction and the New Forest in the other, there are loads of great places to visit near Bournemouth. Here's our pick.

Things to Do in Skegness
Author: Expedia Team

Planning a stay by the sea? Check out our list of things to do in Skegness.

The Best Beaches in Devon for Every Kind of Seaside Trip
Author: Expedia Team

From swimming to surfing and sea-glass hunting, here's our guide to beaches in Devon.

By the Seaside: Guide to Tenby's Beaches
Author: Expedia Team

Planning a trip to the Pembrokeshire coast? Check out our guide to Tenby's beaches.

Under the Sea: Where to Go Diving in Santorini
Author: Expedia Team

Everything You Need to Know about Visiting Siam Park Tenerife
Author: Expedia Team

Discover everything you need to know about visiting Siam Park Tenerife to make the most of the experience.

Things to Do in Brighton on a Rainy Day
Author: Expedia Team

Discover the best things to do in Brighton on a rainy day to make the most of your time in the city.

Discover 11 reasons to visit Brighton in winter, from hiking in a park and ice skating to shopping and sightseeing.

Want to cool off from the Nevada heat? Check out our guide to hitting the beach in Las Vegas.

9 Free Things to Do in Dubai
Author: Expedia Team

Find out the best free things to do in Dubai to make the most of a budget-friendly holiday.