Known as the world's longest art exhibition, taking the subway in Stockholm is more than just a means of transport. Prepare to dive head-first into an underground world of immense creativity, where a metro trip takes you on a journey through time, dating all the way back to the mid-twentieth century and leading you through to the more recent innovative art-experiments of today.

Out of the 110 subway stations dotted along the three lines of the Stockholm metro system (blue, red and green), 90 of them are decorated with sculptures, mosaics, paintings and engravings, carried out by over 150 artists. Below you'll find a list of Stockholm stations that are definitely worth a stop when you're visiting the Swedish capital. 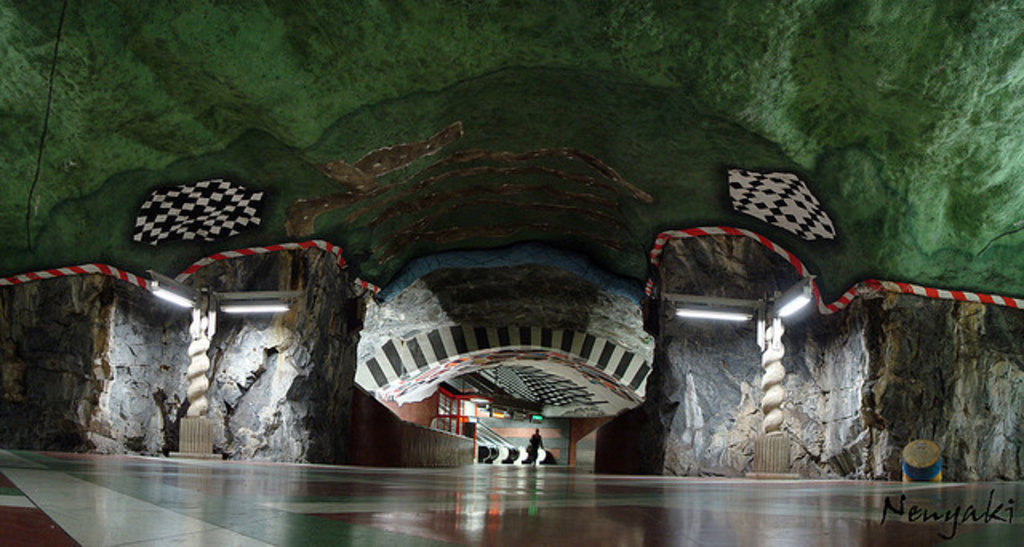 The blue line's Kungsträdgården was opened in 1977 as the 91st station to join the Stockholm metro. Located 34 metres underground, it features several historic remains from buildings that were pulled down during redevelopment in 1950. It's like walking around a reconstruction of the old Makalos Palace, complete with the building's original grand vaults and carved stone columns. 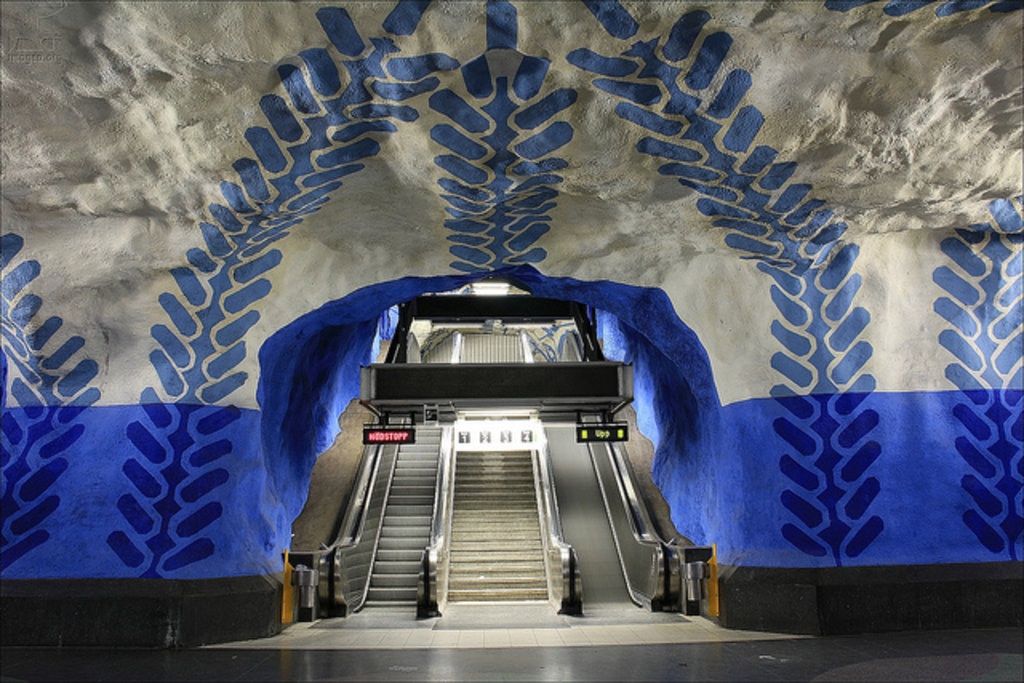 Bang in the middle of the subway map and the easiest way to catch a glimpse of the metro if you're pushed for time, the walls at T-centralen station host a collection of stunning murals. Incorporating man-made materials into the original cavern walls of the underground, this station is a must for any design enthusiast. Look out for vintage 1950s tiles adorning the walls here. 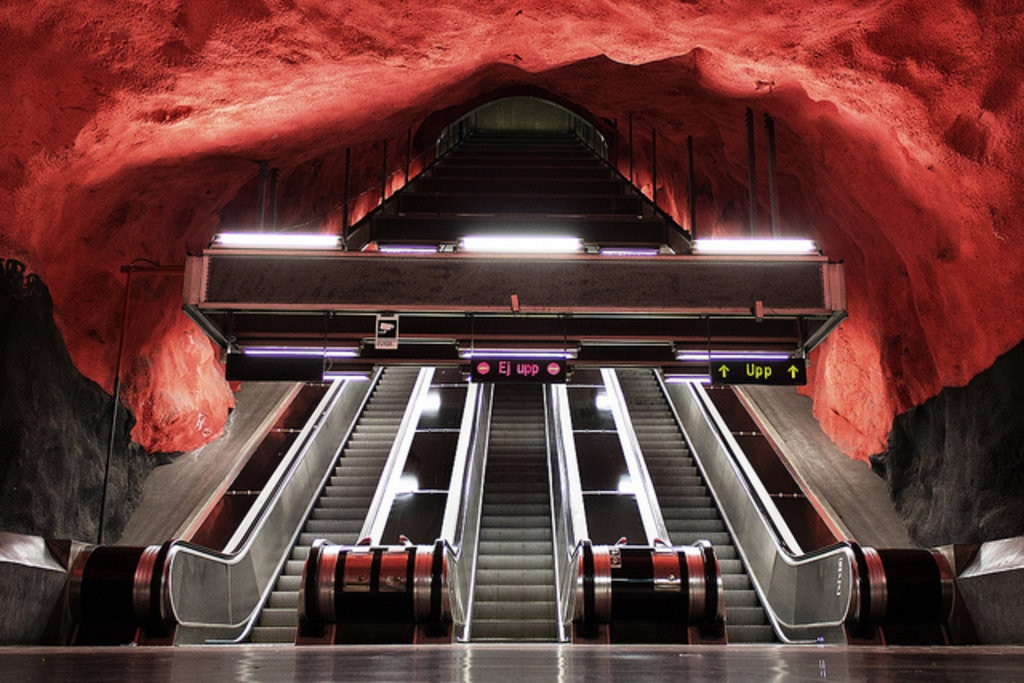 Located only 5km from central Stockholm, Solna Centrum metro station is one of the main attractions on the Stockholm metro line, with original rock walls painted by artists Anders Aberg and Karl-Olov Bjork. Depicting a fierce landscape with a deep, blood red sky and an array of black silhouette houses on the horizon, the mural is said to represent rural depopulations and the destruction of nature and the environment in Sweden. The panorama runs all around the station spanning almost 3000 feet - an incredible work-of-art.

Thorildsplan station is the latest station on the Stockholm metro line to receive a makeover. This green line station was given in a revamp in 2008, bringing it to life with gigantic pixels, symbols, data icons and Pac-man characters, inspired by popular retro video games.

In fact, the artist has created his own game, giving you the chance to journey through another dimension and capture a UFO on your morning commute. Follow the arrows, tunnels and ladders to find your way out onto the street and complete the level! 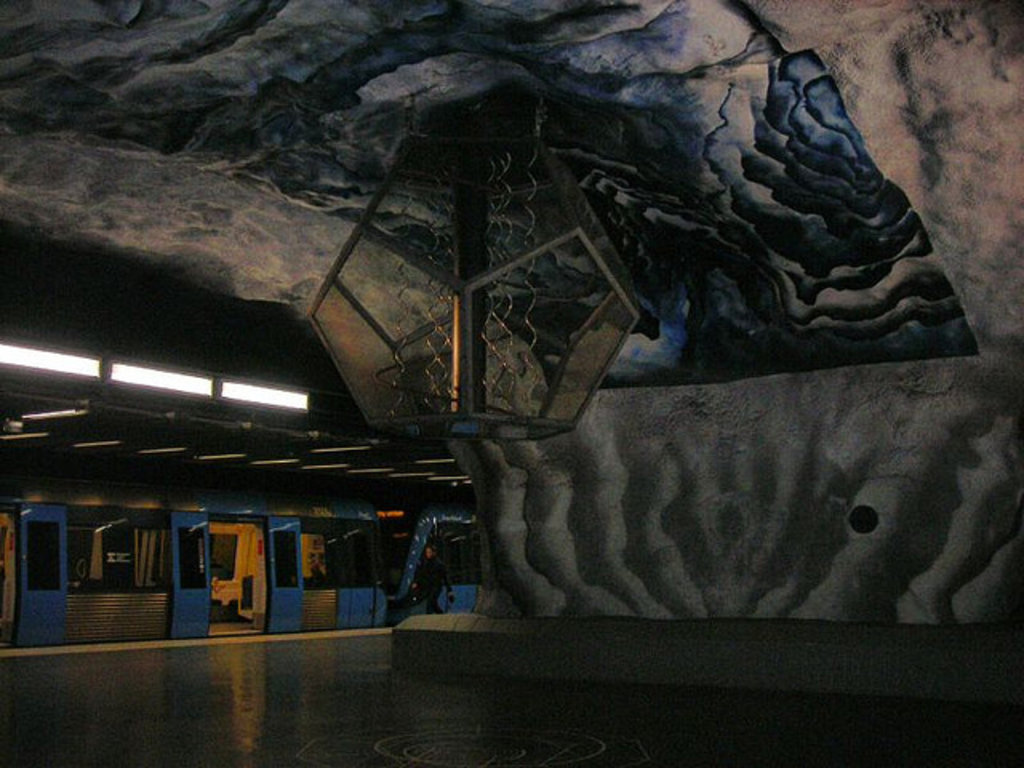 Located in the districts Östermalm аnd Norra Djurgården near the Royal Institute of Technology, Tekniska Högskolan sees thousands of visitors each day and is one of the most popular stops on the red line. Known for its distinctive mathematical symbols and hexagonal sculptures, this subway station presents an almost futuristic theme to contrast the more historical entries on the line.

These are only a few of the stations worth visiting on the Stockholm metro lines. Forget museums, head on underground for the most innovative art exhibition you'll ever visit. The creativity showcased here makes a metro journey feel somewhat exquisite - who could have ever thought riding the metro could be this much fun? Well done Stockholm, we salute you!

Where to Stay in Stockholm

Hotel Birger Jarl is set in a central spot in Stockholm, an 8-minute walk from Humlegården Park. Guests can reach Stockholm Old Town in just 3 stops on the T-bana from nearby Rådmansgatan Station. Downtown is a 20-minute walk away and features the Royal Swedish Opera and Swedish History Museum.

Located in the heart of Stockholm, the Sheraton is set overlooking Lake Mälaren and City Hall, 300 meters from the Royal Swedish Opera, and 500 meters from Kungsträdgården. Old Town is just opposite and across the bridge, and Central Station is a 2-minute walk away.

Hotel C Stockholm is centrally located in Stockholm, right by the Arlanda Express trains to Arlanda Airport. Central Station is a 4-minute walk, and attractions like the Royal Palace and Nobel Museum are a 15-minute walk. It's 2 blocks to the pedestrian shopping street Drottninggatan.

Set in a quiet residential area, this modern hotel is located near the Stockholm Public Library, Gustav Vasa Church, and Odenplan Square.

Stockholm Central Station is a 2-minute walk from Radisson Blu Royal Viking Hotel, making it easy to travel around the city. Shoppers can find Gucci and other upscale stores in Stureplan Square, a 10-minute walk away. The 16th-century Church of Saint Klara offers quiet respite just 5 minutes away.

Radisson Blu Arlandia Hotel is a 4-minute trip from Stockholm Arlanda Airport on the hotel's free shuttle. From the airport, the high-speed Arlanda Express transports travelers to downtown Stockholm in 20 minutes.

Built in 1912, this city centre hotel is located in the heart of Stockholm's theater district, close to the best shopping areas and overlooking the bay of Nybroviken.

This central Stockholm hotel is set in a 19th-century building and is located 500 metres from City Hall, and one kilometre from the Royal Palace and Old Town.

This historic hotel in a converted old mill is directly across the inlet from Djurgården Island, home to the open-air Skansen Museum and Rosendal Palace. A boat ferries guests from the hotel's own quay to the city center in 10 minutes.

Radisson Blu SkyCity Hotel is located in the Arlanda airport at the SkyCity centre between terminals 4 and 5. The Stockholm city centre is just 20 minutes away by the Arlanda Express high- speed train

Located in Sodermalm, this hotel is within 1 mi (2 km) of Medborgarplatsen, The Swedish Museum of Photography, and Stockholm Palace. Museum of Medieval Stockholm and Royal Swedish Opera are also within 2 mi (3 km). Stockholm Södra Station is only a 3-minute walk and Medborgarplatsen T-Bana is 7 minutes.

This hotel is located in Marsta.

Located on the city's main street, Drottninggatan, Best Western Hotel Bentleys is a convenient and pocket-friendly hotel in Stockholm city center. From the hotel, it's a 20-minute walk to the Royal Palace in Gamla Stan. Central Station is only 12 minutes on foot.

Crystal Plaza Hotel is located midway along Birger Jarlsgatan, the longest street in Stockholm. The hotel looks out onto Humlegården and is a 5-minute walk north of Stureplan, home to designer stores like Gucci and Louis Vuitton. The closest metro station is Östermalmstorg, 6 minutes away.

Hilton Stockholm Slussen is conveniently located within walking distance to main tourist attractions and the city center, and offers wonderful water views over Riddarfjärden and the Old Town.

The Best Cycling Holidays in the World
Author: Expedia Team

The Best Cycling Holidays in the World

Find everything you need for a fun visit to the York Art Gallery with this comprehensive visitor's guide.

9 of the Best Art Galleries in London
Author: Expedia Team

Discover the top art galleries in London to experience some history and culture on your holiday.

Everything You Need to Know about Berlin's East Side Gallery
Author: Expedia team

Spend a few hours exploring the Berlin Wall's bright murals, slogans and expressions of peace, love and understanding with our guide to the East Side Gallery Berlin.

Suffering from writer's block? A change of scenery, to somewhere more inspiring might be the answer. Escape it all at one of these five writing sanctums.

There's plenty to do and see in the art scene in Devon! Here's our guide to art galleries in Devon.

Visiting the spas and Georgian buildings of Bath? Check out our visitor's guide to the Fashion Museum.

Williamsburg is considered to be one of New York's most creative neighbourhoods. Here's our pick of things to do there.

Top tips for visiting the main attractions in Vienna, including ticket prices, the best time to visit and how to get there.

What to Know Before You Visit the Prado Museum in Madrid
Author: Expedia Team

A practical guide to visiting the Prado Museum in Madrid, including how to get there, the best time to go, and, of course, what you can expect to see.

Things to do in Stockholm

Fotografiska is anything but your regular museum. We are an international melting pot, combining world-class photography and an avant-garde restaurant with a

The epitome of cool and trendy, SoFo is a vibrant hub for social activities, shopping, and nightlife. Join your local guide, who shares insider tips and

Private Session with a Local Photographer in Stockholm

Connect with a local photographer to capture your most memorable Stockholm moments during this private photo shoot. Get insider tips on what to eat, see and

Must See Stockholm in a Day

We know, we know. You couldn’t really see all of Stockholm’s must-sees in a day, but with one of our hosts with you, you’ll make a good go of it! Maybe

Sailing Adventure in the Stockholm Archipelago with Lunch

Step aboard a luxury yacht for a sailing adventure that explores the spectacular waters of Sweden's largest archipelago. As you navigate a dazzling blue and

As you explore the city, enjoy picturesque views of Stockholm and the Baltic Sea. Start on a bus tour, visit Skansen and the Vasa Museum with your guide, and

Enjoy Stockholm's only brunch tour at sea on this 3-hour cruise of the archipelago and taste typical Swedish foods, such as herring and salmon, as well as

Immerse yourself in the scenic beauty of the Stockholm archipelago during a guided sea kayaking excursion. Paddle into idyllic inlets and keep your eyes

Feel the wind in your hair while pedaling around Stockholm's central islands during a guided bike tour of the Swedish capital. Pump past edifices like the

With our customized tours, you’ll skip the mundane historical tours and discover the city through a local’s eyes. Experience a tour that will transform

Discover Stockholm's most interesting sights and get local insights from an English-speaking guide. Meet at a café in the city center, and then wander

Built on an archipelago of 14 islands and surrounded by the Baltic sea, maritime Stockholm is the perfect city to discover from the water. Set sail on a boat

Are you ready to pillage and plunder! If you are looking for a fun and unique walking tour in Stockholm, then a Stockholm Viking tour might be a tour for

In Stockholm, as is always the case in Sweden, nature is never far away. Just beyond the city limits are extensive lush forests and plenty of farming and

Cruise around Stockholm on a Segway for an entertaining, action-packed tour of its landmarks. After an orientation to get comfortable on your 2-wheeled

Set sail from central Stockholm and cruise the idyllic archipelago away from the bustling city center. As you glide by the greener part of the city, sit back,