Explore > Feature > Zipolite: A Nude Beach That Offers More Than Meets the Eye

“Growing up as biracial and gay in the middle of nowhere in Iowa, no one, myself included, thought that I would be living the life that I am currently living. Through a lot of hard-work and overachieving I found myself at Williams College where I began to discover that I could in fact aspire to more; I discovered that I could get out and…live.

It all started with a trip to Mexico with my high school’s Spanish Club. We landed in Mexico City, and while I had already visited several major cities in the US, I instantly knew that this was going to be a completely different thing. Our tour started at Mexico City’s famous Angel de Independencia. We did some touristy things, and then we went to Puebla, and from there we traveled by bus to Cancun making stops along the way. This trip really opened my eyes to the world out there, but more than that, it left me obsessed with all things Mexico. 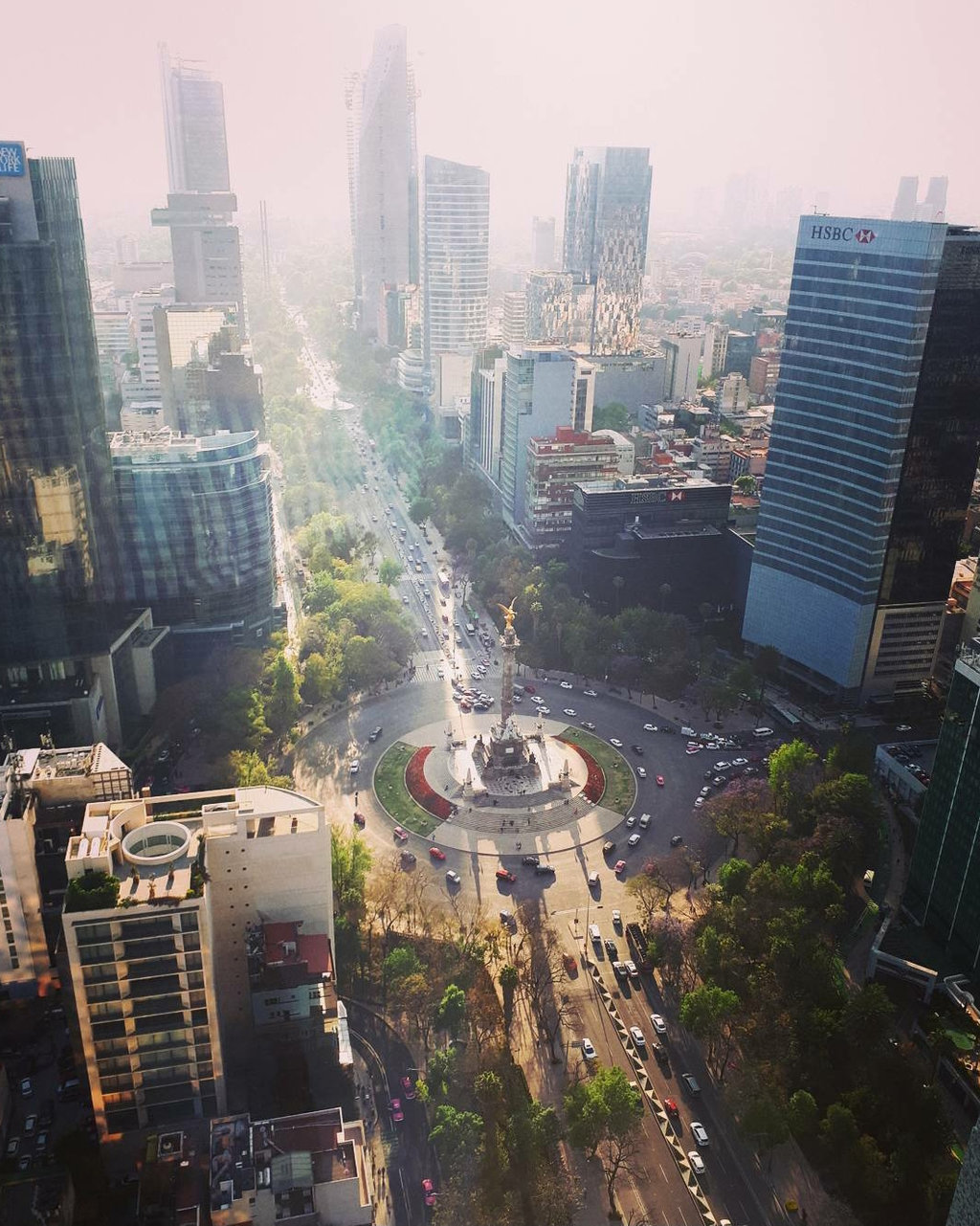 From that point on, I was looking for ways to make my way back to Mexico as much as possible. I went to visit my mom’s new in-laws. I did an internship in Mexico City. I did an exchange program in Cuernavaca, and along the way, as it tends to happen to most who travel, I found a boyfriend to whom I got married in Williamstown in April 2012–my senior year at Williams.

The day after graduation I had officially moved to Altamira, Tamaulipas, Mexico to be with Juan Carlos. It was so surreal. Less than 24 hours ago, I had been packing and attending my graduation ceremony, and now, here I was in a tiny apartment in the middle of nowhere Mexico.

Despite the relative insignificance of my new town, I was elated; I was living the dream. I had gotten out of Iowa. I had graduated from a great school, and I had found a husband.

While I was happy where I was, the dream after the dream was to move to Mexico City, which I was able to do 5 years later, and it’s where I’m currently living and thriving. 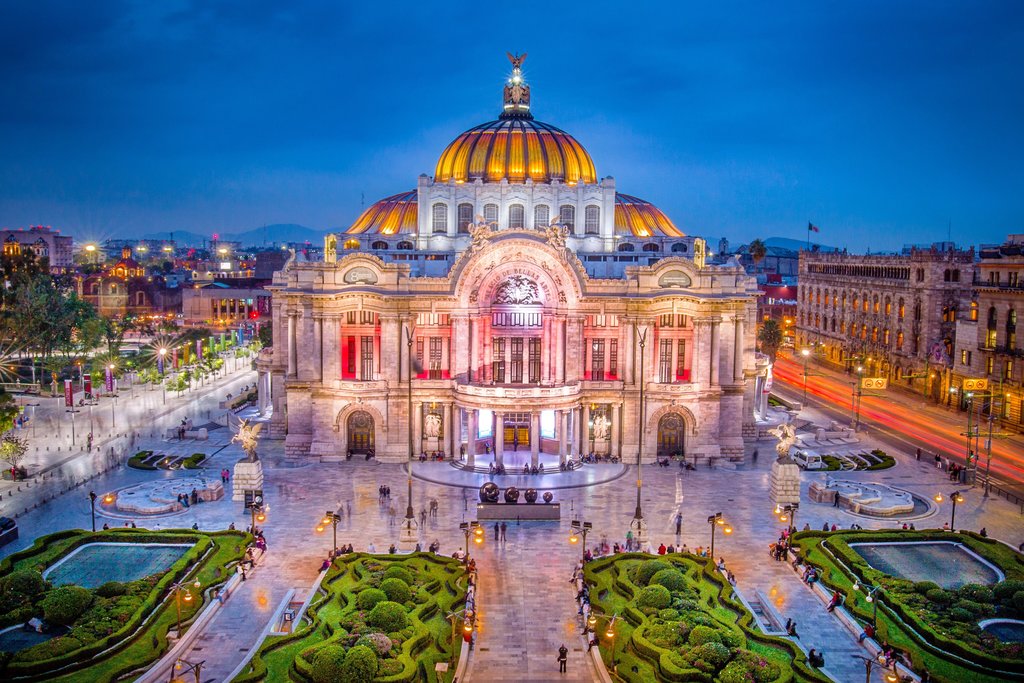 One of the reasons I am able to thrive is due to the fact that I’ve been working at Expedia for 3 years, and in case you don’t know, it’s a pretty great place to work.

So naturally, I have taken advantage of this to the fullest, and in doing so, I have found what might be my favorite place in all of Mexico-Zipolite, Oaxaca. 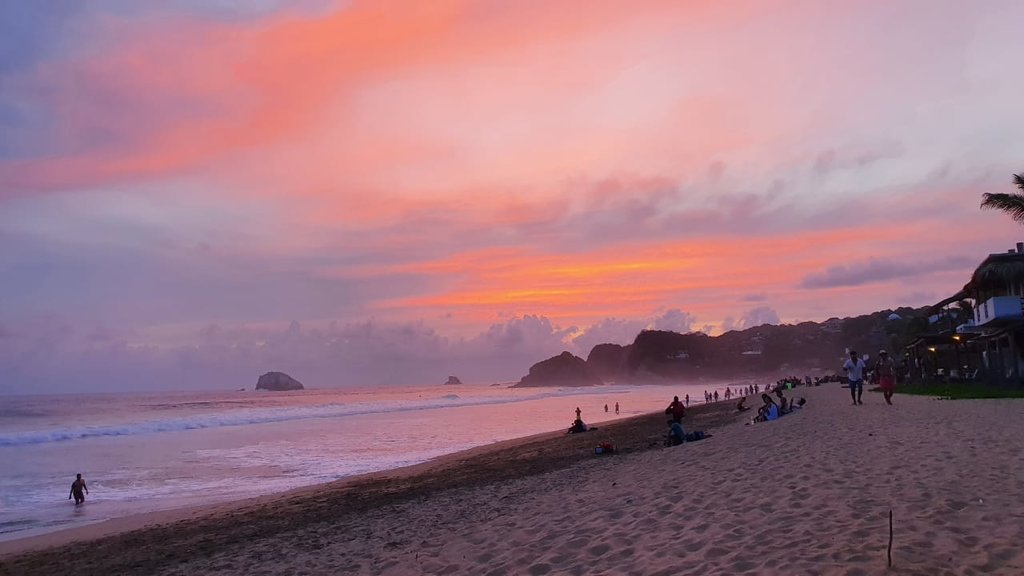 For starters, Oaxaca is one of the most beautiful, ecologically diverse states in Mexico. I could write about it for pages and pages, but I’m going to narrow the scope. I’m here to inform you all about the underappreciated beach town that is Zipolite.

In order to get here, you have to fly either to Puerto Escondido or to Huatulco and then either by renting a taxi or having your hotel pick you up, make your way to Zipolite through the winding, jungle-like roads.

After an exciting hour or so in the car, you begin to see signs of civilization again. In Mexico, you can always know that you are going to be ok if you come across an OXXO. OXXO is Mexico’s ubiquitous chain of convenience stores; it’s Mexico’s 7-Eleven.

On the outskirts of Zipolite, you see your first OXXO and the excitement begins. There’s a local university, random shops, and some light traffic on the narrow road. After another 10 more minutes or so, you will find yourself at the vacation rental, hotel, or hostel of your choice. If you are lucky enough to have found space in one of the beachfront properties, you will now be able to relax to a level that you’ve never relaxed before. 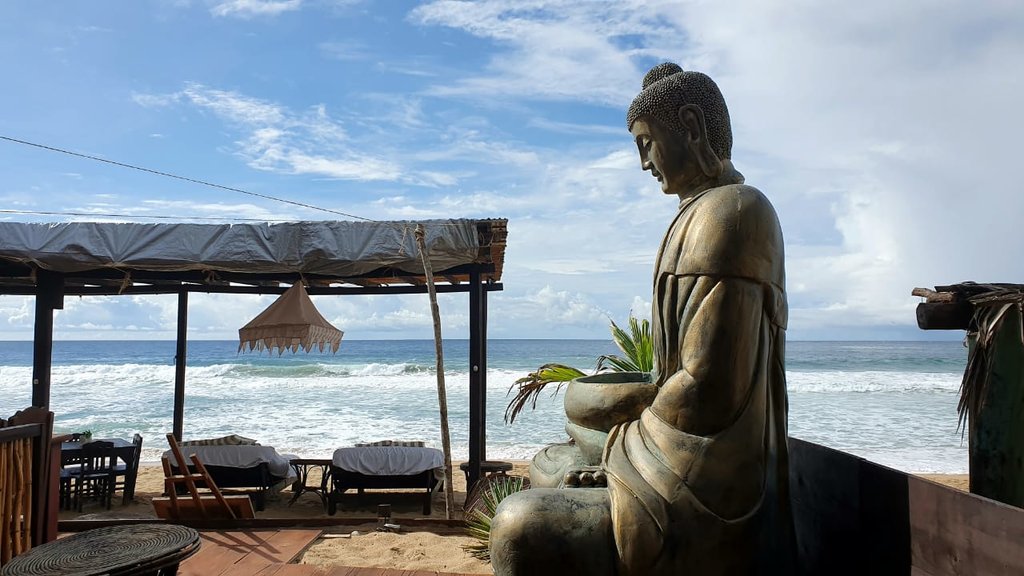 Although the relevant touristic part of the town is a grand total of 7 blocks divided up among 3 streets, you will get this sense of having been transported to another time. The best way to describe it is to think of those costal towns where criminals flee to in the movies when they are trying to get off the grid. The street is full of people selling everything from fresh fruit to handwoven bracelets and necklaces. Of course there are delicious tacos and seafood, but there are also a few foreign owned pizzerias and specialty restaurants.

“But Jordan. We’ve seen the movies. Is this not how every small town on some portion of the coast of Mexico is?” You’re right. It is. I’ve buried the lede. Zipolite is the location one of maybe two nude beaches in Mexico.

At this point, I know that I’ve lost some of you. “Nude beaches? No thanks. I prefer clothes.” And to that I say, live a little! No one’s going to force you to be naked, and in fact many people aren’t, but what’s more important is the following: the people who live and those who decide to travel to a nude beach are … different, to say the least. Because they don’t like clothes? No, because they are more open-minded ideologically speaking, and I cannot emphasize just how important this is to me as a gay man with a husband and gay friends who frequently travel together.

While in Zipolite, I have never, not once, felt that all-too-familiar judgmental, homophobic stare as I walk down the street holding hands with my husband. I have never felt unsafe, and more importantly, I have always, and instantly felt like I belonged. From the moment we check in at Buda Mar Zipolite, no one has ever looked at us weird because we are very obviously more than just bros. They have never asked us if we were sure that we wanted only one bed. The waiter has never asked us if the bill was together or separate because everyone just knows and accepts that yes, these two people and their friends are gay and … that’s fine. 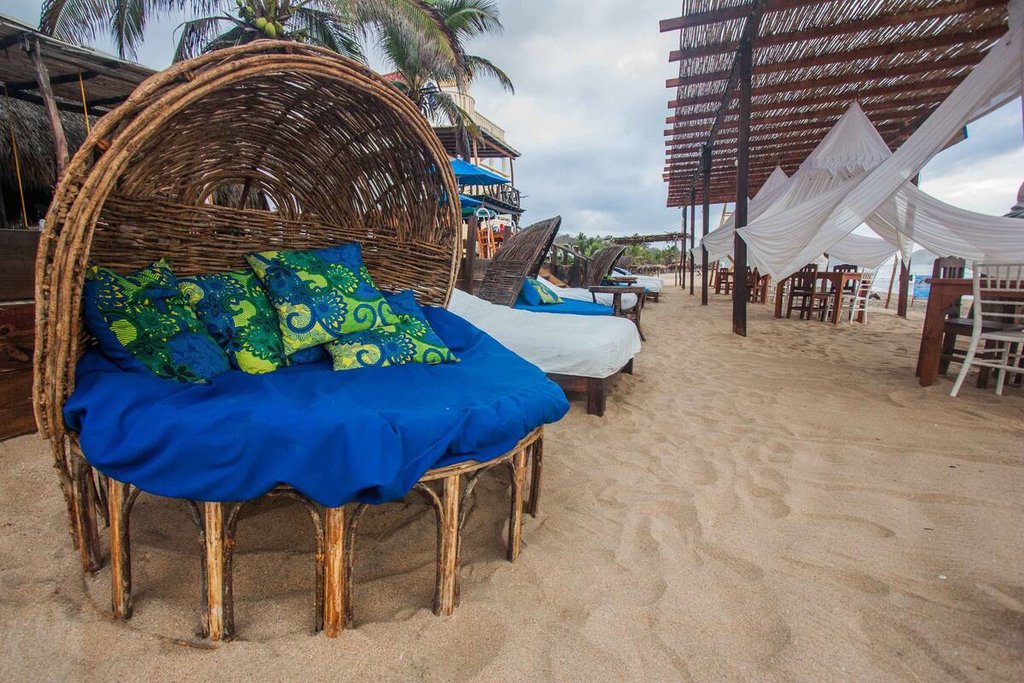 Moreover, every time that I have gone to Zipolite, I have met and become friends with (dramatic pause) straight people! And whether or not everyone was in swimsuits or not and whether or not I had just hugged my “friend” for just a little too long, these straight people have never been anything but supportive and completely normal in their interactions with us. In fact, they always want to know how it is that we met and what our lives are like. This happens partially because that’s what people talk about, but I also know that it’s because, in that moment, we are expanding their horizons. Although there are many heterosexual people who are not homophobic, most heterosexual people have not had the opportunity to truly get to know people who make up the LGBTQIA+ spectrum. Sure, maybe they have a cousin or they may have some acquaintance from work or school who falls under the umbrella, but that’s not the same as getting to know someone on a nude beach as the sun sets in paradise. 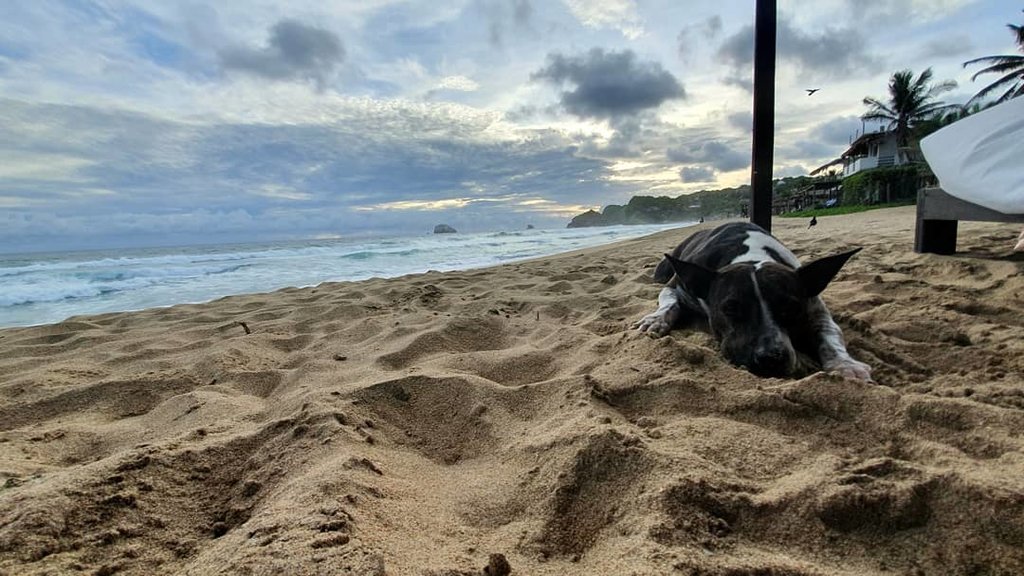 If the aforementioned exchanges, experiences, and day-to-day happenings do not sound like such a big deal, let me invite you to check your privilege. There are very few places in the world where I have personally felt as accepted and free of judgment as I have in Zipolite. I obviously cannot hold my husband’s hand in the extremely religious streets of my hometown, Le Mars, Iowa, and while I could do so in the relatively liberal streets of my neighborhood in Mexico City, it’s just… better… if I don’t.

Obviously, I can get to know straight people everywhere I go, but people are busy and life moves fast, and well, for pragmatic reasons, the straights and lxs demás (everyone else) don’t tend to inhabit the same social circles or physical spaces when it comes time to unwind.

As a social anthropologist of sorts, I can say that this is… a shame. There are so many interesting people out there that we should get to know, but we all have egos and prejudices that keep us from doing this. I highly recommend that we all make more of a conscious effort to break down these self-imposed barriers,and to be honest, there is no better place in the world to do this, than in Zipolite, Oaxaca, Mexico.

Jordan Freking has been working in Market Operations in Mexico City for 3 years now, but he’s been living la Expat vida loca in Mexico for 9. For more of his adventures, you can follow him on Instagram @jfrek.“