Tintagel is one of the icons of Cornwall. A trip to the castle is as essential to the Cornwall experience as tucking into a Cornish tea or pasty. To really do it justice, you'll need to schedule in more than just a quick photo stop. Here's how to make the most of a visit to Cornwall's myth-shrouded monument.

Tintagel is best known for its links to the legend of King Arthur. In the 12th century, Geoffrey of Monmouth wrote that Tintagel was the birthplace of King Arthur in his book Historia Regum Britanniae (The History of the Kings of Britain). His story took hold and the legend continues to this day.

The timeline of the castle goes back much further than the 12th century, though, with Roman coins from the third and fourth centuries appearing on the site.

The majority of the ruins, however, belong to either medieval times, when the castle was actively involved with Mediterranean trade, or the 13th century, when Henry III's brother, Richard Earl of Cornwall, made a base for himself there.

Nonetheless, you don't really need to be interested in history to enjoy this attraction. It's worth a visit for the cinematic views alone. 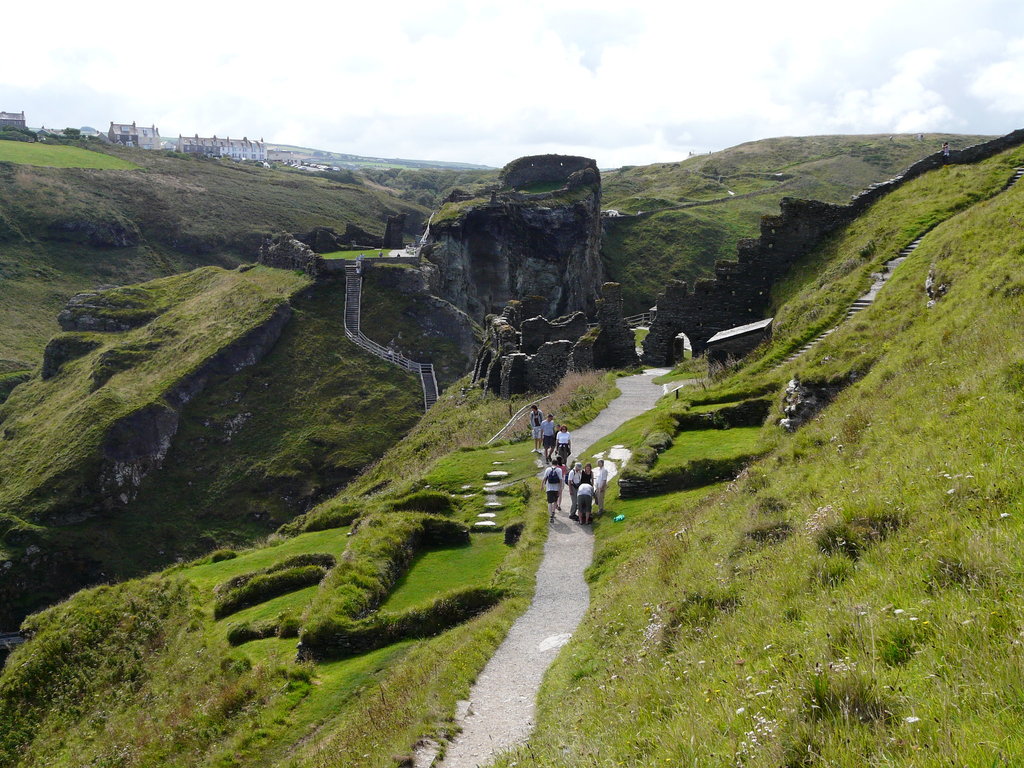 Photo taken by Tristan Ferne via CC BY 2.0 License

Things to Do at Tintagel Castle

Tintagel Castle is in two halves. One side of the castle is on the mainland, and the other is on top of an island just beyond. When the castle was first built, a natural land bridge would have connected these two 'wings', but over time, it has been lost to the sea. In summer 2019, a new £4-million footbridge reconnected the two halves, so now you can cross the chasm between the two sides high above the waves.

Stand in the Shadow of King Arthur

On the island side of castle is a bronze statue of a bearded man in a cloak and a crown, resting on a sword. Named Gallos, meaning 'power' in the Cornish language, it's inspired by the Arthurian myths that infuse into the castle's history, and it makes for a great photo stop.

On the island are remains of a medieval walled garden. This is no stately home-style garden but stepping stones engraved with the story of Tristan and Iseult, which is said to have inspired Earl Richard to build the garden in the first place.

Search for the Carved Face of Merlin at the Beach

Take the steps down from the castle to Haven Beach. When the tide is out, you can venture into Merlin's Cave, where legend says Merlin took Arthur as a baby to protect him from harm. In 2016, a small sculpture of Merlin's face was carved into one of the rockfaces here. The same colour as the rocks, it's camouflaged, so you'll need to keep your eyes peeled for it.

Tintagel Castle has several information boards explaining what the ruins used to be and telling the stories of the people who once visited the site. Some of the boards illustrate the purpose of the ruins or the person mentioned using small iron sculptures, say, of plates of cheese and goblets. 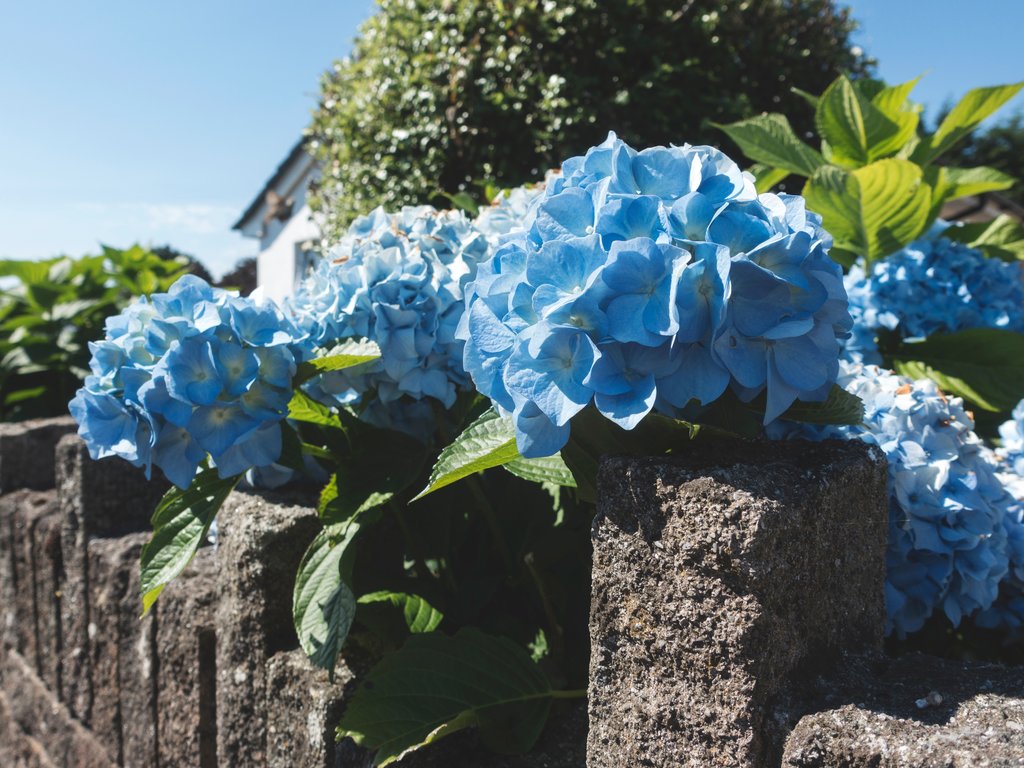 Getting to Tintagel Castle

Tintagel Castle is on Cornwall's north coast, between Padstow and Bude. The best way to reach the site is by car - stick the postcode PL34 0HE into your satnav to get you there.

There's parking in Tintagel Village, a short walk from the castle, and if you have mobility issues or visual impairments, you can take a Land Rover taxi service from here to the exhibition and shop and back again. This service is run independently of English Heritage and doesn't operate in winter.

When you book your ticket in advance online, you choose an entry time as well as an entry day. Only a small number of walk-up tickets are available each day.

There are plenty of places to sit down with a picnic, but there's also a café near the visitor centre that serves soups, sandwiches, cakes and cream teas.

Planning a visit to Tintagel? Extend your stay by booking into one of these top hotels in Cornwall.

All about the Llandudno Victorian Extravaganza 2020
Author: Expedia Team

Classic steam engines, vintage costumes and old-time fair attractions - here's everything you need to know about the Llandudno Victorian Extravaganza 2020.

We're thrilled to interview two of our favourite travel bloggers, Lloyd and Yaya from Hand Luggage Only! Read on for plenty of travel inspiration...

We're thrilled to interview one of our favourite travel bloggers, Monica Stott of The Travel Hack. Read on for lots of travel inspiration!

The Ultimate Guide to Shopping in Birmingham
Author: Expedia Team

Discover the best shopping areas to explore on a trip to Birmingham, from vibrant markets to designer boutiques.

What to Do in York in Spring
Author: Expedia Team

Discover the best activities and events to experience during a holiday to York in the spring.

More Articles on Off the beaten track

The Best Abandoned Castles in the UK
Author: Amy Baker

Explore the UK's fascinating history by visiting the ruins of its many castles. Here are 10 of the best abandoned castles in the UK.

The Best Off the Beaten Track Destinations in Northern Ireland
Author: Brenna Holeman

If you're looking for a quiet break, check out one of these hidden gems. We've rounded up the best off the beaten track destinations in Northern Ireland!

The Best Off the Beaten Track Destinations in Scotland
Author: Brenna Holeman

Heading to Scotland on holiday but want to find a hidden gem? Here's our list of the best off the beaten track destinations in Scotland.

The Best Off the Beaten Track Destinations in Wales
Author: Brenna Holeman

If you're looking to find some Welsh hidden gems, we've got you covered. Here are the best off the beaten track destinations in Wales!

The Best Off the Beaten Track Destinations in England
Author: Brenna Holeman

If you're looking for the best off the beaten track destination in England, look no further! Here are a few of our favourites.

Venice's surrounds are packed with charming islands, romantic towns and architectural wonders. Here are the best day trips to take from Venice.

From local learning to alternative bucket lists showcasing the road less travelled, the way we explore is changing. Here are 20 travel trends for 2020.

Your guide to five apartments in Las Vegas where you can leave the casino behind and see what else the city has to offer.

Itinerary tips for 3, 5 and 7 days in the Lake District
Author: Explore by Expedia

Find out what to do and see on your next trip to the Lake District in England with expedia.co.uk/explore.