Milan is a couture powerhouse, recognised internationally as one of the world's most influential fashion capitals. Home to the crème de la crème of clothing lines including Valentino, Versace, Dolce and Gabanna and Prada, it's a fashionista's paradise. Even if you're not in a buying mood, you can't complete a getaway to Milan without a visit to the fashion district.

The Rectangle of Gold

The Quadrilatero d'Oro in Milan is known as the 'rectangle of gold'. The high-class shopping district is regarded by fashion magazines Vogue and Elle as the most important fashion district in the world. The name actually refers to four adjoining streets north of Dumo on which numerous boutiques and retail outlets for the top class designers are situated. Here's a breakdown of what you will discover on each street: This upscale street was one of the first streets in Milan known for its luxury fashion, today it's the most important street in the district and is well-known for its ready-to-wear collections. The Gucci shop is situated here, alongside some of the most exclusive Italian shoe boutiques. The window displays are second-to-none, making this a lovely street for a nice stroll. Check out the Louis Vuitton, Gucci and Versace stores for the most recent lines. Even if your style's more Coco Chanel, this street is for you.

This street has more than just fashion stores however, you'll also find the Museo di Milano, a museum dedicated to the history of the city. And, when you've shopped and toured yourself out in Milan, we recommend that you drop into Caffe Cova for some traditional Milanese cakes and tea.

This street is home to Grand Hotel et de Milan and several impressive palazzi. In addition to the long list of retail shops, the Museo Poldi Pezzoli is located here. The museum displays a private collection from Gian Giacomi Pezzoli and his mother Rosa. The exhibition includes weaponry, glassworks, ceramics, jewellery and furnishings. A must see for all you art-enthusiasts. 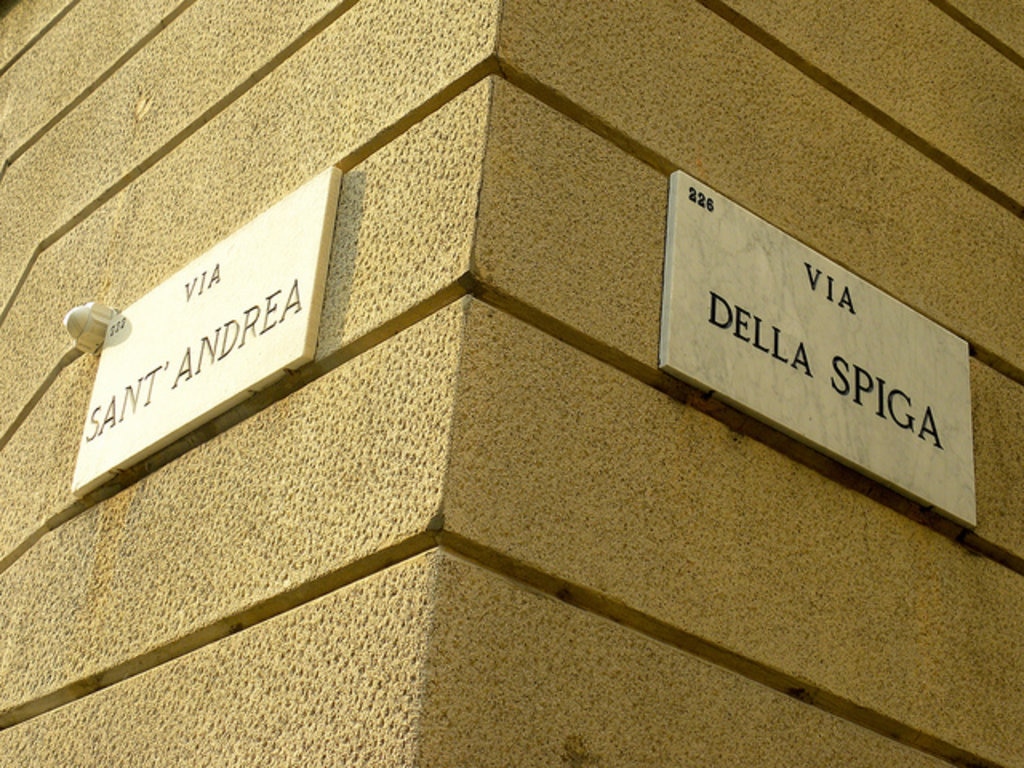 Here you will find stores for labels such as Bulgari, Krizia, Sergio Rossi and Dolce and Gabanna. You may not recognise some of the names on this street as many are very 'haute couture'. However, if you're looking for something unique and are willing to pay a pretty penny, this street is for you - many of the boutiques sell one-off exclusive items.

Almost one step ahead of every other city, couture lines jump from catwalk to clothing rails in just a few weeks in Milan. This means that Milan is also home to some of the best designer outlets in the world - what's 'so last month' in Milan, may not have even hit the UK shelves!

So if you feel the price tags in Quadrilatero d'Oro are a bit over your budget, head on down to Fidenza Village. Situated just outside Milan this shopping village features over 100 designer boutiques that offer up to 70% off. These include Valentino, Paul Smith, Missoni and Michael Kors.

Don't worry if you're not really into shopping high fashion - Milan also has an amazing vintage scene where you can pick up something really unique.

Which designer boutiques are your favourite in Milan? Tell us in the comments box below.

Where to Stay in Milan

The sleek Sheraton Milan Malpensa Airport Hotel & Conference Center is directly in front of Terminal 1, and next to the Malpensa Express, a 50-minute train service to downtown Milan. From there it’s 4 stops on the metro to the Duomo Gothic cathedral, and a few more to Castello Sforzesco.

Set in a 17-story tower, this hotel is 2 blocks from Milan's Main Central Station, and adjacent to Piazza Duca d'Aosta, from where coaches run to the airports and metros run to the Duomo in 15 minutes.

Situated near the airport, this hotel is 0.6 mi (0.9 km) from Volandia Museum of Flight and 2.6 mi (4.1 km) from Castelnovate Ruins. Castle Visconti San Vito and Basilica di Saint Agnese are also within 6 mi (10 km). Malpensa Airport Terminal 1 Station is 27 minutes by foot.

Located in the heart of Somma Lombardo, this hotel is within 1 mi (2 km) of Castle Visconti San Vito and Basilica di Saint Agnese. Volandia Museum of Flight and Church of Saint Peter are also within 6 mi (10 km). Somma Lombardo Station is 21 minutes by foot.

Strategically located in Milan, only 200 meters from Central Station and 150 meters from 2 metro stations. Hotel Berna allows easy access to the Duomo, the Castello Sforzesco, and the Fashion Quadrilateral. The Milano Rho-Pero, Milano City, and the new MICO Milano Congressi are also within easy reach.

NH President Milan is located right in the city center, a 5-minute walk from the Palazzo Reale and Duomo Cathedral. San Babila Metro Station is 7 minutes on foot from the hotel, and Milan's fashion district is a few minutes by cab.

Situated near the airport, this hotel is 0.9 mi (1.4 km) from Volandia Museum of Flight and within 9 mi (15 km) of Congress Center MalpensaFiere and Robinie Golf Club. Safaripark and PalaYamamay are also within 16 mi (25 km). Malpensa Airport Terminal 1 Station is 28 minutes by foot.

Hilton Milan is located in the heart of the city, a few steps from Milan's business district and from the most famous fashion flagship stores. The Central railway station, the metro stop, and shuttle buses for the 3 main airports are located within a short walking distance.

This hotel is located in the business district of east Milan, only 6 metro stops away from the city centre, and close to Milano Rogoredo Train Station (direct line to Malpensa and Rho Fair); the nearest metro station is 15 metres from the hotel.

This business-friendly Milan hotel is situated close to Domus Academy and San Siro Stadium. Other area points of interest include Cathedral of Milan.

Located in Central Station, this hotel is within a 15-minute walk of Corso Buenos Aires and Piazzale Loreto. Corso Como and Pinacoteca di Brera are also within 2 mi (3 km). Sondrio Station is 6 minutes by foot and Caiazzo Station is 10 minutes.

Located in Milan Centre, this hotel is within a 10-minute walk of Indro Montanelli Public Gardens, Corso Buenos Aires, and Via Montenapoleone Fashion District. Orto Botanico di Brera and Pinacoteca di Brera are also within 15 minutes. Turati Station is only a 4-minute walk and Milan Repubblica Station is 5 minutes.

Located in Central Station, this hotel is within a 10-minute walk of Corso Buenos Aires and Piazzale Loreto. Politecnico di Milano and Porta Venezia are also within 1 mi (2 km). Caiazzo Station is only a 2-minute walk and Loreto Station is 8 minutes.

How to travel to the places Brits are dreaming of visiting
Author: Rishika Sharma

Tips on how to visit top destinations for Brits

We asked our go-to astrologers, The AstroTwins, how every zodiac sign can satisfy their wanderlust within 2020's guidelines. Here are their planetary planning tips.

Tap into a Vacation State of Mind with at-home travel activities for families with kids to inspire wanderlust.

The Best Road Trips in the UK
Author: Brenna Holeman

From the Highlands of Scotland to the Northern Irish coastline, here are some of the best road trips in the UK!

We're thrilled to interview two of our favourite travel bloggers, Lloyd and Yaya from Hand Luggage Only! Read on for plenty of travel inspiration...

The Best Off the Beaten Track Destinations in Northern Ireland
Author: Brenna Holeman

If you're looking for a quiet break, check out one of these hidden gems. We've rounded up the best off the beaten track destinations in Northern Ireland!

The Best Off the Beaten Track Destinations in Scotland
Author: Brenna Holeman

Heading to Scotland on holiday but want to find a hidden gem? Here's our list of the best off the beaten track destinations in Scotland.

The Best Off the Beaten Track Destinations in Wales
Author: Brenna Holeman

If you're looking to find some Welsh hidden gems, we've got you covered. Here are the best off the beaten track destinations in Wales!

The Best TV Shows to Inspire You to Travel
Author: Amy Baker

At home and in need of some escapism? We've compiled a list of the best TV shows that will inspire you to travel.

Our list of the best songs about travelling is just what you need to remind you of your adventures while stuck at home.

Things to do in Milan

Da Vinci was one of the greatest creative minds of the Italian Renaissance, greatly influential not only as an artist and sculptor but also very talented as

Best of Milan by Night with Rooftop Aperitivo & Appetiser

Discover historic gems, panoramic vistas, and a moment of contemplative quiet within the humming Italian capital of fashion and design. Take an evening stroll

Maximize your time in Milan as you cruise to the sites of your choice with a personal rickshaw driver. Decide your itinerary, and then sit back for a

Lake Como is a magic place that inspired and still inspires many artists and celebrities. On the tour, discover Lake Comoin a small group tour, traveling in a

Como is a city of culture and art. The old town features elements from its Roman and medieval past, as well as religious buildings and palace. You will take a

A 2.5 hour guided walk through the old town with several mouthwatering stops in selected shops. More than a simple “walk and eat” tour, our professional

Cooking class in the woods! 1h from Milan

We will prepare Italian dishes together, I'm a Personal Chef and I'll be happy to share with you my best recipes. I propose different menus on different

A 4 hour cooking course taking place in the charming fishing hamlet of Mandello del Lario near Varenna, a characteristic village on the lakeside at a cooking

ItineraryThis is a typical itinerary for this productStop At: Piazza del Duomo, 20122 Milan ItalyMilan Cathedral is the cathedral church of Milan. Dedicated

If you are looking for the symbol of Milan, located in its very city center you are in the right place: the Cathedral, as known as Duomois the best place

On this day trip from Milan, travel by high-speed train to the birthplace of the Italian Renaissance. Hop aboard a red hop-on, hop-off bus to explore

Enjoy a day of shopping just one hour away from Milan at Franciacorta Outlet Village. Located between Lake Garda and Lake Iseo, this premier shopping

The sense of beauty has its origins in Bellagio, you feel it all around you, in the splendor of its noble mansions and villas, in the elegance of its

Kickstart Your Trip to Milan

No one likes wandering around looking lost when they first arrive in a city - no one we know, anyway. You'll join one of our friendly Milan hosts to make sure

Leave Milan on an air conditioned coach and in just one hour you are in Como visiting the historic center and have a boat cruise if one hour. The tour

Try to answer to all your mysterious questions about Leonardo Da Vinci and his masterpiece during this one-hour guided experience to the Last Supper. You will