Ever stared up at the night sky and wanted to travel to outer space? Well, we're still a few years from being able to rocket off to a crater-top resort on the moon. But if the final frontier sounds like an attractive destination, there are plenty of space-themed getaways you can visit in the meantime. Boldly go to these hotels for the astronaut experience. 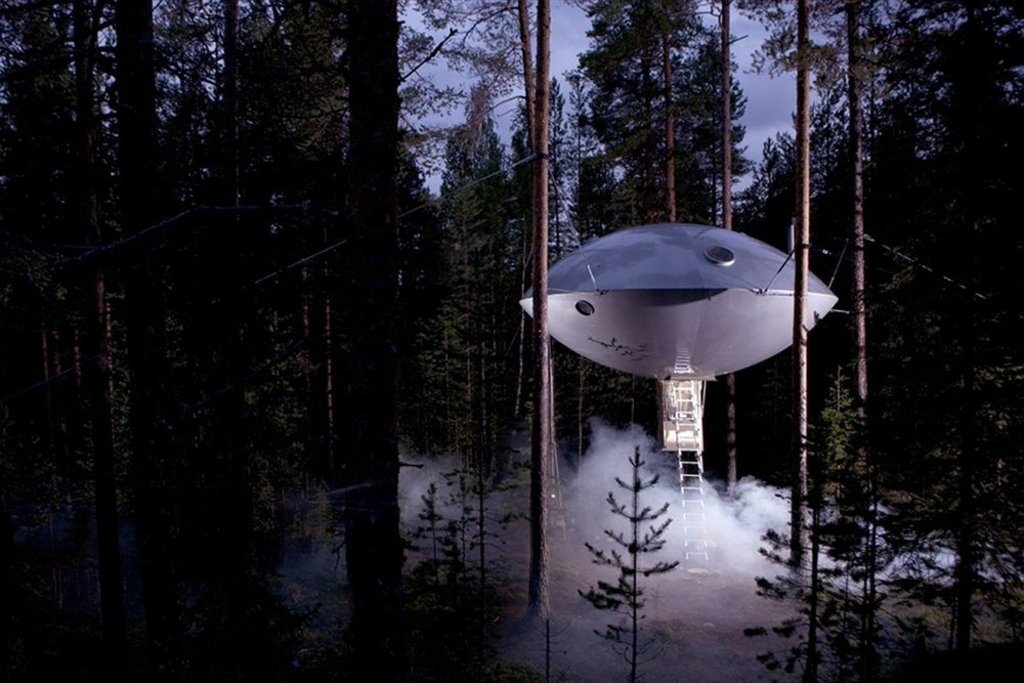 Located 560 miles north of Stockholm, Lulea is a small coastal city in the north of Sweden. Head inland from Lulea and you'll arrive in Harads, a remote village with a population of around 500, just 30 miles south of the Arctic Circle. Here, nestled deep in the expansive evergreen thickets of the Lule River valley, you'll find a selection of luxurious tree-house hotels, built to immerse their guests in nature. The Treehotel complex includes an outer-space-themed offering, called the UFO. This replica alien spacecraft is a treehouse that cosily accommodates up to five people and is designed to look like a flying saucer landing on Earth. 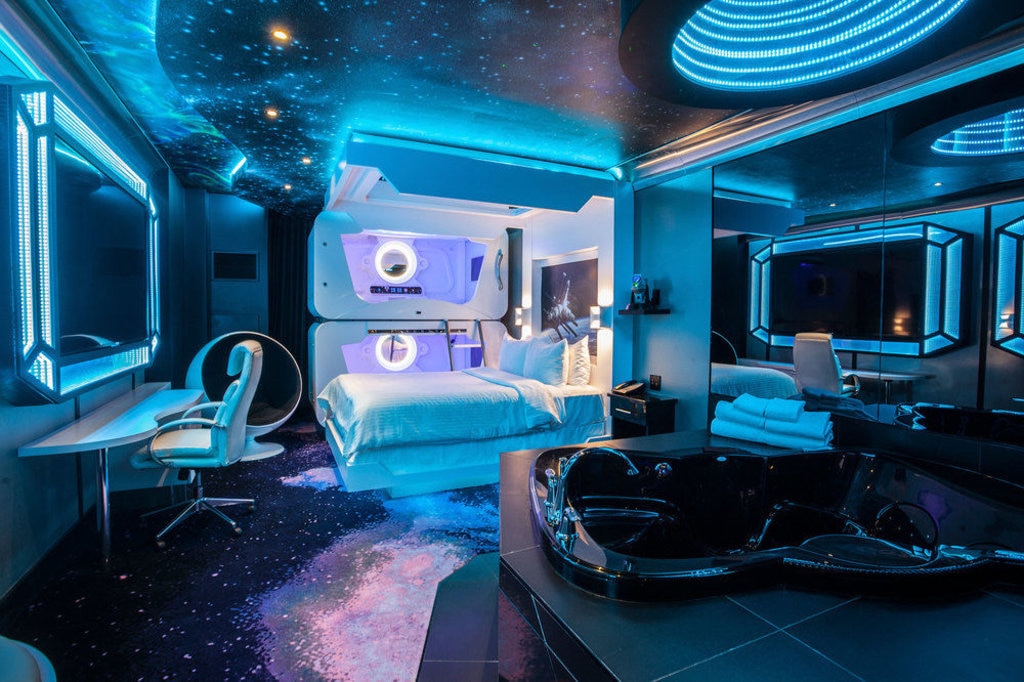 Every year, 32 million people visit the West Edmonton Mall - the largest shopping mall in North America. If you're among them, the shopping centre's Fantasyland Hotel will gladly put you up in one of its themed rooms. The hotel's novel collection includes Roman- and Western-themed rooms, among others, but the space-themed room is the highlight. It includes a pair of capsule-style bunkbeds, a glowing starry celling, and a jacuzzi. Save for the hot tub, it's a pretty convincing spacecraft simulation. 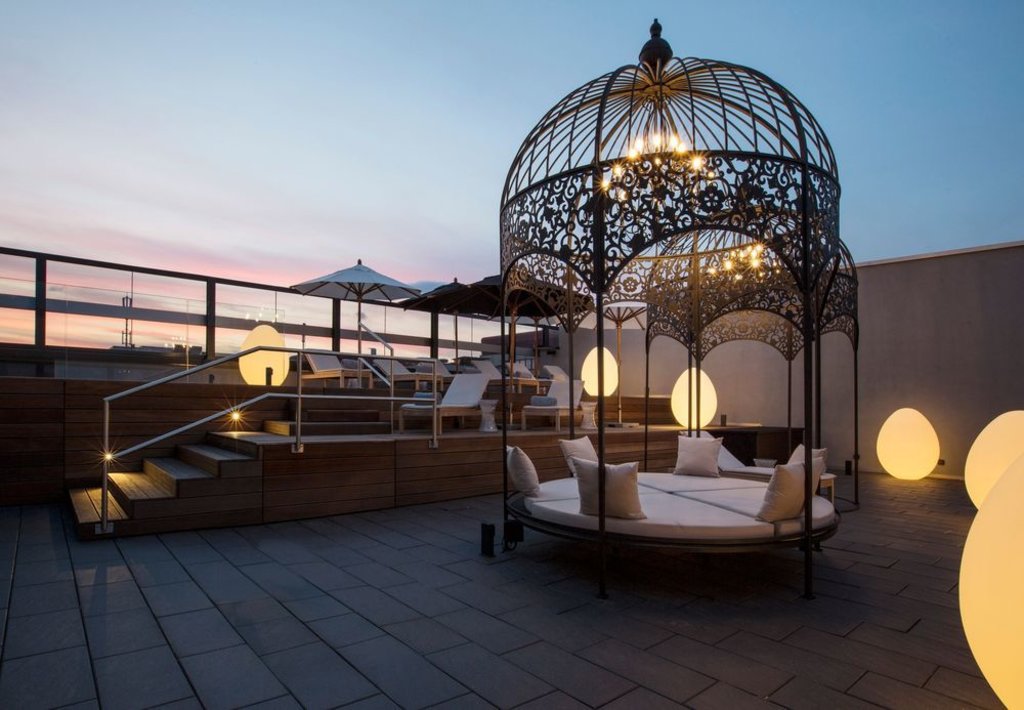 Designed by German artist Michael Najjar, the Space Suite in the Kameha Grand Zurich hotel is sleekly astro-themed, and replete with minimalist and metallic furnishings. But it's most notable for its exquisite attention to detail. On the wall, an outstretched astronaut glove appears to beckon its guests - but really, it's a handy hook for keys and coats. In the 'sleep module,' the bed appears suspended in the air, as though in zero-gravity. Even the overhead lights in this suite are actually a 3D printed model of rocket-ship exhaust pipes.

Situated right on the South China Sea, every room in the Hong Kong Gold Coast Hotel has enviable ocean views, but only one transports you beyond the terrestrial realm (and comes with a telescope). This hotel largely caters to families, and its Outer Space Room is great for kids, who can sleep comfortably inside the miniature rocket ship made just for them. In fact, if you're travelling to Hong Kong with little ones, this room is one of eight themed suites designed with them in mind. But there's plenty for grown-ups, too, including a lusciously palm-fringed swimming pool and award-winning dining. 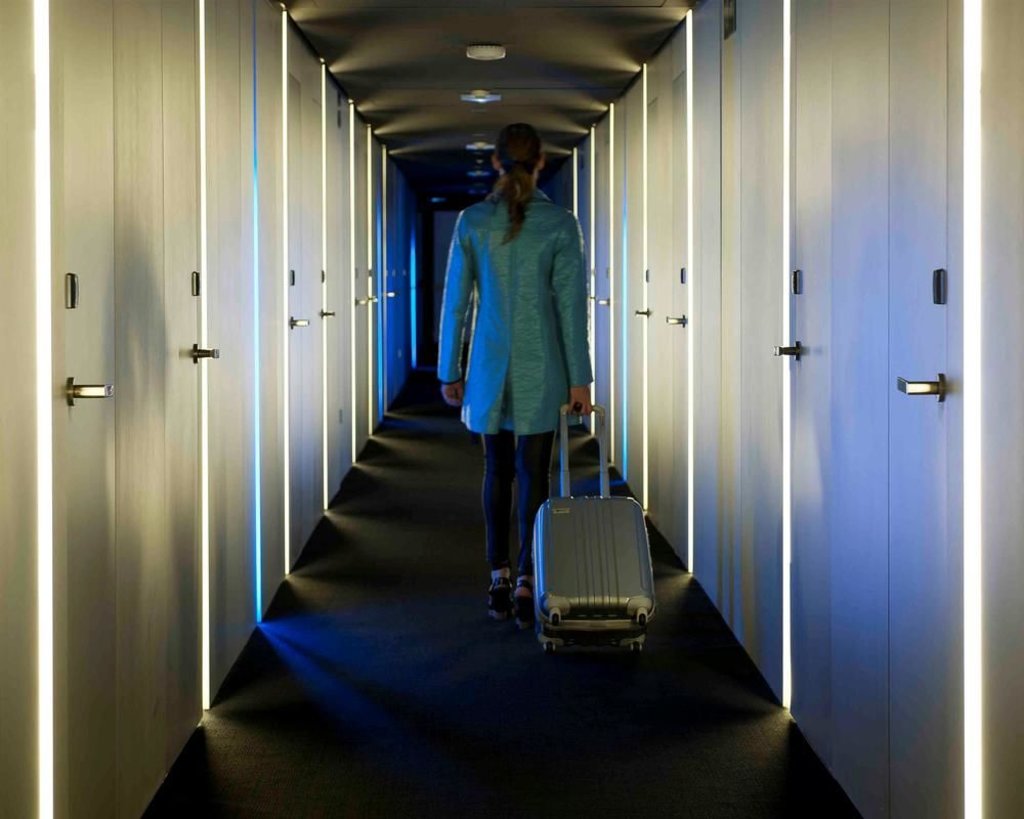 Though Barcelona is no stranger to unusual architecture, the Barcelô Sants hotel stands out. Its entire modish interior looks like a spaceship. After checking in at the 'boarding desk,' you might feel as though you've stepped into 2001: A Space Odyssey - though you're unlikely to hear the phrase, 'I can't do that, Dave.' Plus, though this hotel may seem miles away from Earth inside, it's supremely well-located. The Barcelô Sants hotel has direct access to the Barcelona Sants train station, the city's main railway hub.

What You Need to Know about Visiting Berlin's Museum Island
Author: Expedia Team

Use this guide to get tips and inspiration for visiting Berlin Museum Island and prepare yourself for a once-in-a-lifetime experience.

Explore Essentials: Things to Do in Copenhagen
Author: Expedia Team

Discover the top attractions and experiences to enjoy during a trip to Copenhagen, from historic sites to bustling nightlife.

Discover what to do in Kreuzberg, including attractions and activities in Berlin's eclectic Kreuzberg neighbourhood, from trendy cafes to historic sites.

The Ultimate Guide to Shopping in Madrid
Author: Expedia Team

Discover the best shopping in Madrid to find unique souvenirs and gifts to remember your experience in Spain.

The Ultimate Guide to Shopping in Berlin
Author: Expedia Team

Discover the best shopping in Berlin, from vintage gems to high-end designer goods and creative spaces.

Discover the best things about Budapest in winter, from the beautiful scenery to the vibrant holiday markets.

Discover 10 little-known facts about Qatar and find out why this is a great destination for a holiday.

Your ultimate guide to London's best museums with tips on costs, when to go and how to get there

6 Unusual Things to Do in Glasgow
Author: Expedia Team

Discover the most offbeat and unique things to do in Glasgow, from enchanted ancient forests to eccentric and rare puppet collections.

Corfu with a View: Hotels with Panoramas of the Ionian Sea
Author: Expedia

The beach is one of the best reasons to visit the Greek island of Corfu, but these five hotels all offer more than just sun and sand.

Paphos Hotels with Views of the Mediterranean
Author: Expedia

These five hotels all offer you a fantastic place to stay with views of the glistening blue waters and spectacular sunsets of the Mediterranean.

Out of Place: Vegas Hotels Inspired by Other Parts of the World
Author: Expedia

You need something special to grab people‚Äôs attention in Las Vegas, the brightest and liveliest city of them all. These five hotels have no trouble doing just that, taking guests on a journey to another destination.

When it comes to an ambitious city like Dubai, it‚Äôs clear, from the manmade palm tree shaped island to the towering Burj Khalifa ‚Äì¬†and everything else in between ‚Äì¬†that the sky‚Äôs the limit when it comes to imagination.

Blogger Picks: Cosy Hotels in Denmark for a Winter Retreat

Here‚Äôs a selection of London hotels serving inventive afternoon teas, as picked by Victoria Watts Kennedy, the blogger behind Bridges and Balloons.

Back in Time: Hotels for Exploring the History of Rhodes
Author: Expedia

Back in Time: Hotels for Exploring the History of Rhodes

Whether you are heading to the southern seas for coral reefs and sandy beaches or vibrant cities packed with gourmet restaurants, boutique shopping and world class cultural attractions, these five hotels in Oceania provide the perfect base for making the most of your time in this captivating region.

When It comes to travelling, sometimes it just needs to be about spending a bit of ‚Äúme time‚Äù, escaping the stresses of everyday life and finding the perfect spot to simply relax.

Whether you‚Äôre looking for luxury spa treatments, meals in an unforgettable setting or activities that make the most of the natural surroundings, all five of these hotels offer a taste of paradise, down here on earth.

If there is one place in this world that lives up to its hype and even the clich√©s, it‚Äôs New York. And although it‚Äôs also The City That Never Sleeps, you‚Äôll still need the perfect place to rest your head, which is where these hotels close to New York attractions come in.